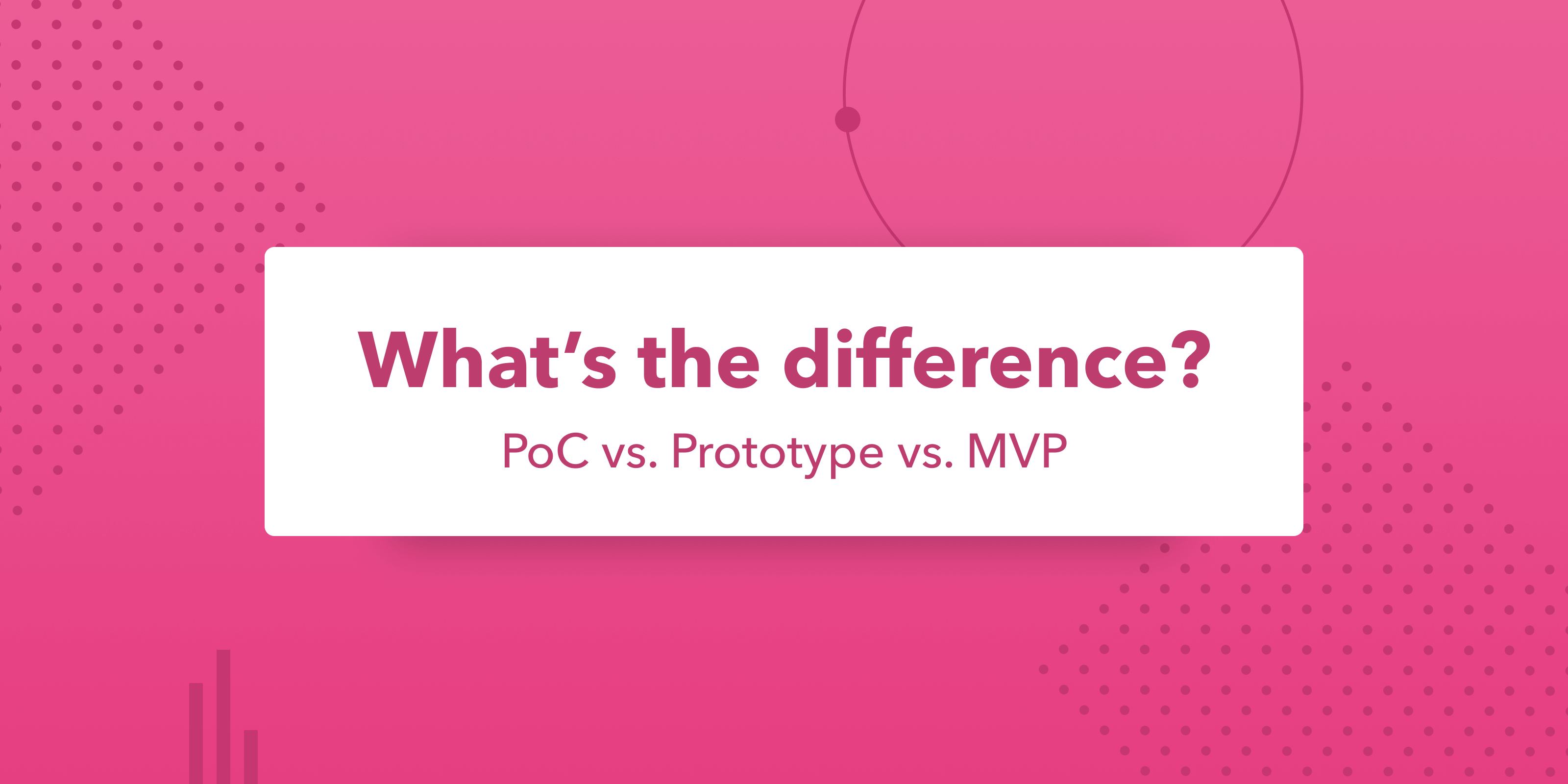 Over the last several years, the tech startup industry has developed its own sub-culture, and with that its own unique lexicon. When we’re doing well and feeling great, we’re “crushing it”. We don’t talk about specialists or experts; instead, we often call the particularly talented and knowledgeable among us “ninjas” and “wizards”. Among the things that we’re all “disrupting”, it seems like traditional business terminology is a big one.

Things may get a little bit confusing at times, and while a lot of it is just a question culture and trends, it’s important to clear up some keywords if you’re going to get involved in the tech industry - particularly if you’re an entrepreneur.

So what does it mean when techies and investors talk about a proof of concept (PoC), minimum viable product (MVP), or a prototype in our industry? What’s the difference the difference between these terms, and why do they matter?

Here are a few things to consider:

It’s not always about the product, it’s about the stage of the company.

It’s commonplace for people to get confused about PoC vs MVP vs Prototype in development because it’s assumed that the product is the focal point of a tech company. It’s not. At the core of every company is a problem they are a trying to solve, or a need that can be met in the market. A mobile app, web app, or VR experience is just a means of delivery for the solution of that problem or need. You don’t have a “great idea for an app”, you have developed a hypothesis of an assumed problem and solution within the marketplace, and you believe that an app is the most effective way to deploy your solution.

From this perspective, every business starts at the proof-of-concept stage. As a young company (tech or not), you believe that you have identified a problem in the marketplace, and now you need to prove that your business model works and that demand exists for your solution. A PoC isn’t the first version of your app, it’s the process of validating your assumptions and your business model. For some companies, a PoC can be extensive market research, interviews, and raw data that validates your assumptions. For others, a PoC could be a running business using a patchwork of manual tools like email, spreadsheets, SMS, etc. If you get positive results, like a significant number of sign-ups, inquiries, or sales, then your PoC is doing its job at demonstrating the potential of your solution.

A great example of a company that has proven its concept and is moving towards MVP is a client of ours, Martyr. They help “Martyrs” create a plan of achieving goals while teaching the premise of time sacrifice and investment to get where they want to be. Martyr gives people the tools and environment to discover self awareness as opposed to prescribing solutions and inspiring you through a founder’s story. Martyr aims to be the equivalent of a fitness tracker, but for emotion.

Launching with 7 pilot users 2 months ago, Martyr has now grown to 32 by using a patchwork of available tools like Zapier, G-Suite, and a few other organizational tools. They’re currently beginning a round of fundraising to turn their proof of concept into a scalable digital product.

Ok, so you’ve proven that you have a viable opportunity. What’s the next step?

If, like Martyr, you’ve successfully proven the value of your concept, then you’re now at the stage of your business where you can start thinking more about your product. A company that has progressed into the next phase has successfully provided enough value to early stage investors or clientele that you need to start thinking about creating the first version of your digital product.

Is the first version of your product the prototype, the MVP, or both?

Let’s break down these terms and a take a look at how they work together.

Let’s start by defining prototype. According to the Merriam-Webster dictionary, a prototype is a first, typical or preliminary model of something, from which other forms are developed or copied. In our process, a prototype is the completed visual representation of how the digital product will look, feel, and interact once it’s programmed. A prototype for a digital product is not a functional app. It’s not built with code, and doesn’t work with live data. Instead, it uses images linked together in a program like InvisionApp to simulate the experience of an application.

Once an experienced UX/UI team has created a prototype for you, you can then share it with groups of prospective users and go through loops of feedback and revisions to optimize the prototype. Doing some user testing and getting feedback on your prototype is crucial. As nothing has been coded yet, it’s relatively cheap and easy to make substantial changes at this stage, which may not be the case when you have a real application. You should gather feedback from your users and other stakeholders, and use it to refine the prototype. Once you have your revised prototype, you can start looking into development and turning your prototype into an MVP!

So what exactly is an MVP?

A minimum viable product or “MVP” is a fully functioning and market-ready product that is developed with only the features necessary to satisfy the early adopters (your first batch of real consumers) and directly address the problem and opportunity in the market. Think of it as your prototype brought to life through code.

The purpose of an MVP is to have as lean of a product as you can in the marketplace so that you can learn what features, functions, interactions, and experiences the market actually demands, as opposed to which of those things you assume the market would demand. You want to prevent the bloat of your application by strictly giving users access to core functionality, and only later building additional features when you’re certain that they will be useful.

It’s easy to get confused by the dense terminology of the tech world, especially when different people will propose different definitions for the same word. When it comes to defining preliminary versions of your product, it’s most important to think about PoC vs MVP vs Prototype in the context of what stage your business is in. A proof of concept for a tech company isn’t their product, it’s the validation of their business model (however that is done). Once a concept has been proven valid and creating a digital product is proven necessary, the process starts with prototyping and designing. After you’ve created an interactive prototype, and completed a significant amount of user testing in the prototype phase (cheaper, faster, and more effective), you can begin developing an MVP with a core feature set. User feedback will then guide your next steps as you iterate on your product and continue to grow.

A working knowledge of these terms will help you both in speaking with investors and agencies, and with understanding how your business can best bring value to your customers.